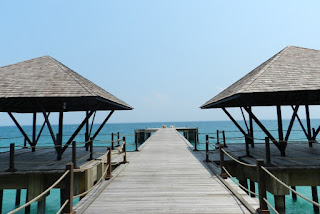 One of many islands off the mainland coast of Malaysia, Pulau Tengah is only one-mile wide and has been host to only two known, vastly different groups of people.  The first was a group of Vietnamese refugees in the 1970s and the second was the cast of the Swiss version of Survivor - "Expedition Robinson".  After hearing from a neighbor that a small, 20-villa eco-friendly resort had recently opened for business and had some good "buzz", we were more than willing to play the part of guinea pig. 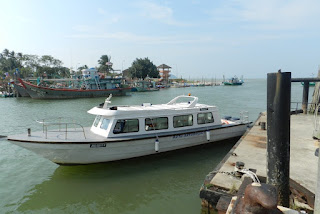 Our soon-to-be sister in law Kara, (Greg's fiancee) was along with us for this trip - part of her two week visit to Singapore.  This made it especially fun for the kids as they were excited to show Kara a good time.  To get to the island, the five of us were up at dawn and in the car by 6:00 am in order to beat the Singapore National Day traffic.  It was about a three-hour drive, crossing the border and up the east coast of Malaysia, mostly through palm tree farms.


After meeting a representative of the resort at the "Port Cafe" in the tiny town of Mersing, we enjoyed an adventurous, high speed, sometimes tooth loosening boat ride to the small (less than a mile wide) island.  It was all well worth it once we saw the translucent blue waters of Pulau Tengah, and were greeted by the friendly staff of Batu Batu. 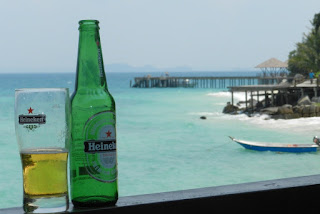 We had to wait a few minutes for our villa, but that was just fine by us.  We took advantage of the opportunity to order a cold drink and the kids quickly changed into swim suits and were on the beach hunting for shells before we even sat down on one of the huge, comfortable daybeds found scattered around the bar area. 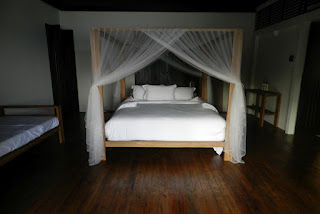 When our villa was ready, we were escorted down the palm tree-lined sand path that connects most villas to the reception, dining and pool areas.  Our villa sat directly on the beach, offering a beautiful, unobstructed view of the white sand and South China Sea.  Inside, was a king-sized bed, children's annex (with bunkbeds) and quite possibly the largest bathroom I've ever seen.  Outside, we had a nice beachfront patio and steps that led directly onto the beach.


﻿ ﻿
We arrived on a Thursday and spent most of the first day exploring the island.  First, we were treated to an amazing lunch.  The resort offers three options per meal - but you don't need more than that.  Everything we ate was delicious and finding out what was on the menu for each meal quickly became one of the most exciting parts of the day. 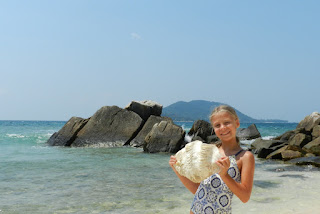 After lunch, we continued to explore the beach just outside our villa where Kara, Sophia and Cooper found dozens of huge, beautiful clam shells.  We then made our way around to Long Beach - the largest, most picturesque beach on the island.  We hiked across the open beach, then took a "trail" (if you could call it that) to a more isolated part of the island.  Here, we had the beach to ourselves and found a perfect little spot to swim, snorkel, and basically lounge for the afternoon.   That evening we had another delicious meal (I had Papaya Salad with Prawn and Roasted Rack of Lamb) and, after getting the kids to bed, we enjoyed a cocktail on the patio outside our villa.

On Friday we woke up to the sounds of the ocean and headed towards Long Beach for another day of...well, nothing.  We made a stop at the dock we had arrived on, this time, jumping the 20 feet or so from the top of the dock to the water below.  This was probably one of the highlights of the trip.  I jumped first, followed by Kara - and soon after, by Cooper and Sophia.  I was amazed that the kids made the jump, but after getting the nerve to do it once, they didn't want to stop!  Over and over they jumped from the dock until I got tired of treading water in the swells and begged them to head to the beach for a while. 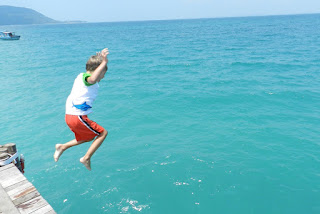 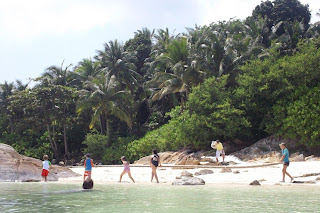 This time we weren't alone on the beach, but with only 20 villas total on the entire island, nothing's ever crowded.  Soon Sophia and Cooper were playing with a few other kids, and like a scene from Survivor or Lost, they were constructing balance beams across the tidepools with fallen palm trees.  The whole scene was hysterical to watch.

After a long day in the sun, we enjoyed another unbelievable dinner (Thai Chili Chicken Salad and Beef Rendang for me).  With the kids in bed, we pulled a daybed from the patio to the beach where Kara saw about 20 shooting stars in 4 minutes....which all turned out to be birds flying through a nearby spotlight.  (you had to be there, it was funny). 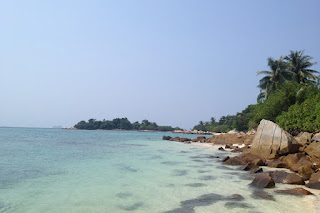 On our final day at Batu Batu, we rented three kayaks to go on "turtle patrol".  The island is a marine preserve with a huge part of their mission focused on supporting the breeding of green sea turtles.  After only three minutes of paddling we came across a huge turtle - at least 3 feet across - followed by a couple of smaller ones about five minutes later.  Sophia was in heaven. 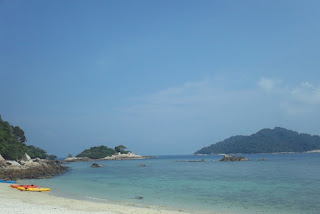 We traveled about a third of the way around the island before Cooper told me he wanted to keep going ALL THE WAY AROUND the island.  This was a great idea - especially if you were simply enjoying the ride as Sophia and Cooper were - but not such a great idea if you're the one who has to paddle!  We tried it anyway and were glad we did.  On the far side of the island, it was deserted.  A few small, untouched beaches were there as well as some amazing views of the forest and rock cliffs unreachable unless you hike and have a machete. 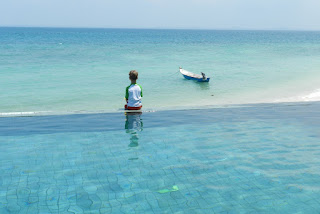 Finally, we made it back to the resort, glad to have made it all the way around the island, but even happier to relax in the cool pool and enjoy a cold drink.  Our boat ride back to Mersing and eventually Singapore was only a few hours away, so we did our best to soak in as much of Batu Batu as we could in the time we had left.  The kids hunted for more shells and played in the pool and Jennifer, Kara and I relaxed and enjoyed the sun.

Eventually, however, all good things come to an end - and so did our trip to Batu Batu.  After another 20 minutes on the boat we met our driver in Mersing and headed back to Singapore.  This time, we saw dozens of monkeys along the road.  Apparently they had slept in on Thursday morning when we drove by the same areas at 8am, but they were everywhere on Saturday evening. 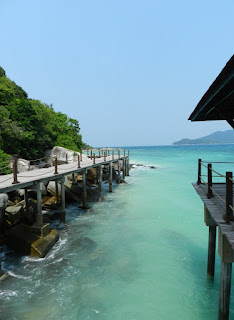 A few hours later, we all wished we were still at Batu Batu enjoying another delicious dinner and listening to the waves.  Instead, we were sitting in traffic at Singapore immigration, eating the Pringles I bought when we stopped for gas in Johor Bahru.  However, once we crossed back into Singapore and the road names started to look familiar, it was quite comforting.  Especially since I know we'll go back to Batu Batu.  In fact, for those of you who visit us in the next 24 months, it's likely to be on the agenda!